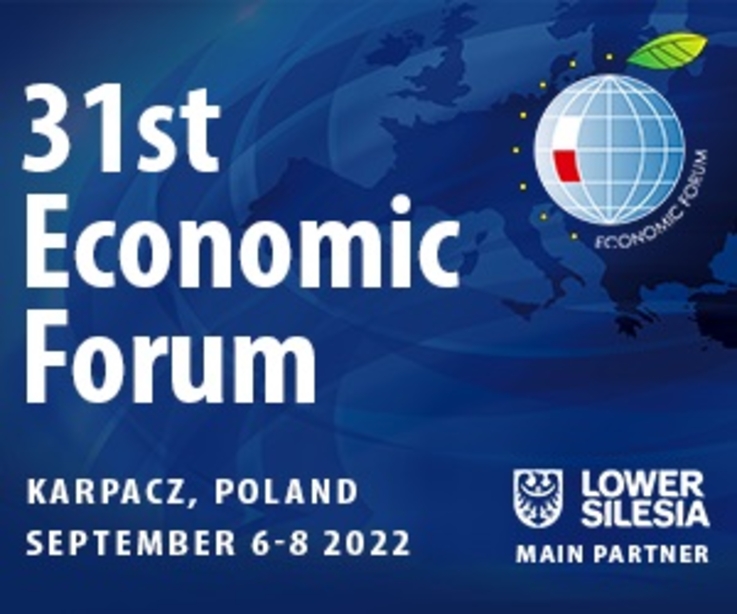 31st Economic Forum - banner
On September 6, the Golebiewski Hotel in Karpacz will host the 31st edition of the Economic Forum, which is the largest conference in Central and Eastern Europe. It is Institute for Eastern Studies Foundation that, once again, organizes this unique, happening in cooperation with the city of Karpacz and the Lower Silesia Voivodship. The motto of this year’s edition is „Europe in the face of New Challanges”.

31st Economic Forum will be held at the Golebiewski Hotel in Karpacz and will last from 6 to 8 September.

An event has been organized for over a quarter of a century and from then on is every year’s meeting place for politics, business and science representatives. The biggest strength of the Forum brand is its international character, as evidenced not only by numerous guests but also media’s attention.

This year’s edition includes over four hundred debates featuring guests from all over the world. The conference agenda will include the topic of security, energy or international politics. As in previous years, The Healthcare Forum, Europe of the Carpathians and The Polish Diaspora Economic Forum have their established position in the program. Furthermore, due to the events across Poland’s eastern border, a special place in the lineup is dedicated to the extended Ukrainian path. A debate will be concerning on the future of Europe, a partnership between Poland and Ukraine, financing the reconstruction of the Ukrainian economy, and Ukraine in the European Union.

Since 2018, a valid part of the Economic Forum is the Report prepared by the Institute in cooperation with the Warsaw School of Economics. Its 5th edition will be presented this year. The publication is a comprehensive scientific study on the state of the economy of Poland and the countries of Central and Eastern Europe in 2022.

An integral part of the Economic Forum are awards for eminent figures and companies and organizations of merit for Europe. The Program Council will again present awards in three categories: Man of the Year, Company of the Year and NGO of Central and Eastern Europe.

The Forum will be accompanied by a rich cultural and recreational program, including concerts, film screenings and presentations of the region’s tourist attractions. Traditionally, there will also be meet the author sessions. The program will be run each day of the conference after 7 p.m.