Survey also shows that half of the responding countries have agreed to include dentists in their priority vaccination groups.

Thursday, 25 February 2021 (Geneva, Switzerland) — FDI World Dental Federation today called for more countries to enable dentists to administer COVID-19 vaccines after a survey of its members revealed the small number of countries currently permitted to do so. The survey was facilitated by FDI’s COVID-19 Task Team.

Fifty-seven member national dental associations, from across the globe, revealed that nearly two-thirds of countries had not granted permission to dentists to administer COVID-19 vaccines as part of national rollouts. In Europe, countries where dentists are not permitted to administer the vaccine include Switzerland, Portugal, Austria, Denmark, Slovakia, and Russia (see Table 1).

In France, the National Order of Dental Surgeons has called on the government to grant permission to the profession, but no authorization has been given to date. Discussions are also ongoing in Spain, Sweden, Ireland, Australia, Kenya, Hong Kong, and Germany.

“Efforts should be made to enable dentists to administer COVID-19 vaccines when possible within national legislation and regulations, and with minimal disruption to oral healthcare services.”

Of the 57 survey responses, the countries who have granted authorization to the profession to administer vaccines include: Cambodia, Colombia, Egypt, India, Indonesia, Lebanon, Nigeria, Serbia, Slovenia, and the United Kingdom (17 per cent) (see Table 2). Significantly, some of these countries include those where dentists have not previously been allowed to administer vaccines, or at least the influenza vaccine.

In the United States around 20 states are currently permitting dentists to administer COVID-19 vaccines.

The survey also examined the prioritization of dentists in COVID-19 vaccine roll-out programmes.

A total 53 per cent of responding countries said that dentists would be included in priority vaccination groups (see Table 2),12 per cent said that they would not be, and 18 per cent responded that the vaccination programme and priority groups were still being planned. Those countries NOT including dentists as a priority group include Cambodia, Colombia, Kazakhstan, Romania, Saudi Arabia, South Korea, and Thailand (See Table 1).

Ahead of World Oral Health Day on March 20, FDI will release a new set of data around the caseload of COVID-19 infection amongst dentists around the world.

About FDI World Dental Federation: FDI is the main representative body for more than one million dentists worldwide, with a vision of leading the world to optimal oral health. Its membership comprises some 200 national member associations and specialist groups in over 130 countries. www.fdiworlddental.org 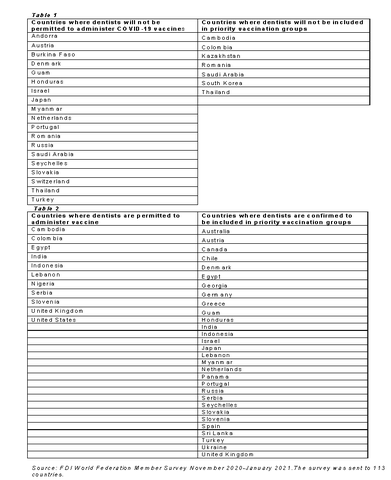